Closing Party the Summation of the 6th KIFF 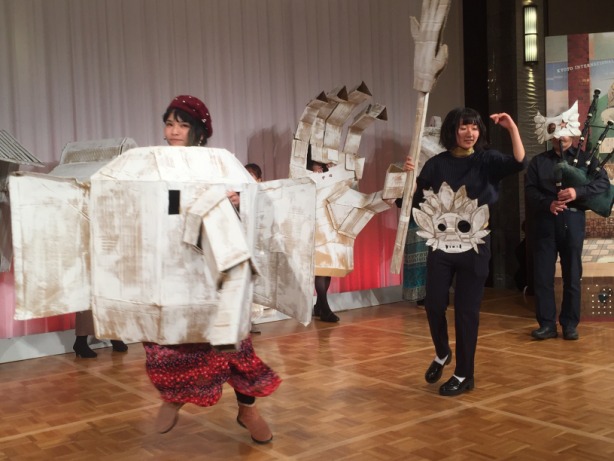 The 6th Kyoto International Film and Art Festival came to a conclusion with a gala party at the Hotel Okura Kyoto, traditionally considered the leading luxury hotel in the city. Guests from all areas of the Japanese film industry congregated in the 4th floor banquet hall to celebrate the successful conclusion of another KIFF.

Kyoto International Film and Art Festival Executive Committee Chairman Ichiya Nakamura kicked off the festivities with some opening remarks. He observed, “We were able to see a lot of great film and art at the fest which utilized every part of Kyoto city. I think this event is unique in the world for what it puts forth and I would like to thank all the filmmakers, artists, producers, executives, government officials, media and everyone who contributed to the event.”

Sadao Nakajima, Honorary Chairman of the Kyoto International Film and Art Festival Executive Committee offered a toast for the great effort put in by all. As guests enjoyed the refreshments the Mayor of Kyoto, Daisaku Kadokawa, took the stage. He first offered his thanks to all the tens of venues that had offered their space to host events, performances, screenings and exhibitions for the festival.

He noted that he is happy to help promote the UN’s Sustainable Development Goals (SDGs). The Goals are principles that encourage a sustainable lifestyle for humankind, spearheading a socially conscious aspect to the fest. Kadokawa stressed KIFF was contributing greatly to the cultural life of the city, and expressed his gratitude.

Participants enjoyed a show with performers wearing paper mache costumes designed by Takaaki Tsujino and dancing to bagpipe music and the joyous celebration of the arts drew to a close for another year.