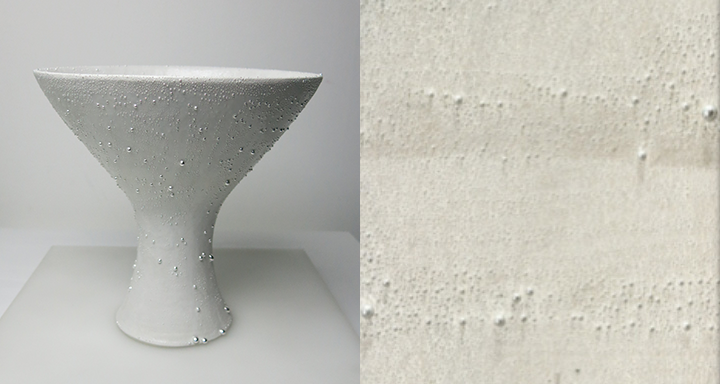 "Vessel of Drops", the trophy given out for the Shozo Makino Award and Toshiro Mifune Award is designed by the ceramist and artist Takahiro Kondo, using his Gintekisai techniques (patented).
The drops represent circulation, purification, and rebirth, and the vessel with trickling drops represents the beauty of transience, instead of seeing it just as a useful object.
The empty vessel also represents the reality and the dream world where spirits travel back and forth.
The city of Kyoto is also a vessel, in which people’s talent and aesthetics are challenged. This trophy is designed with the hope that the international film festival is held and continues to develop in this transient, spiritual vessel of Kyoto. 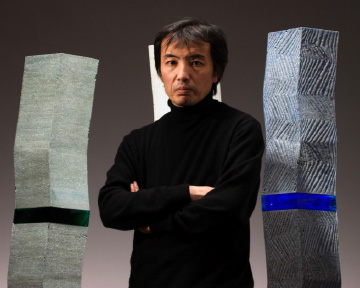 Born in Kyoto in 1958. His grandfather is Kondo Yuzo, who was named a Living National Treasure for his underglaze cobalt-blue wares.
He has a Master’s degree from Edinburgh College of Art. Kondo won a scholarship from the Agency for Cultural Affairs for the trainee program of Overseas Study for Upcoming Artists. He has also won the Kyoto City New Artist Award and Inglis Allen Masters Award. With porcelain material and technique at its core, his works are created using soil, glass and metal, which are introduced at various exhibitions and art fairs inside and outside Japan.
His solo exhibition includes the National Museum of Scotland (Edinburgh), Barry Friedman Ltd (New York), and "Metamorphose” in Paramita Museum, Nariwa-cho Museum, and Kyoto Art Center. His group exhibitions include “The Exhibition of Chinese Blue-and-White porcelain and Japanese Modern Kondo Ceramic Art” at the Beijing Palace Museum (Forbidden City), “Contemporary Clay” at Boston Museum of Fine Arts (Boston) and Japan Society (New York). His works are included as permanent exhibit at the National Museum of Scotland, Museum of Fine Arts Boston, and Metropolitan Museum of Art, among others.