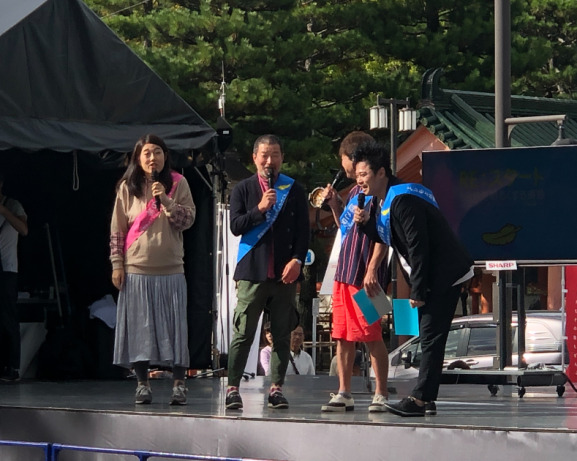 In the afternoon under bright blue skies and with the sun shining down, attention turned to the stage at Okazaki Park, surrounded by picnickers and families enjoying the warm weather.

Led by one of Yoshimoto’s most famous comedians, Yuichi Kimura, the “RE:Start - Power to Make a Brighter Society” began at 2pm. The talk event supported by the Ministry of Justice was designed to encourage people who had sinned in the past to find outlets for rehabilitation.

Sata, who had been detained for damaging a taxi in his younger days in Fukuoka, and Omizo, who has also been arrested for running away. Now working as comedy duo Bad Boys, they aim to make the society brighter, by admitting their mistakes and thinking about how to help others who are trying to rehabilitate.

The duo discussed if there were things they would like to redo in their lives, and shared stories of confessions from their school days. Other guests then discussed their own regrets in life.

Kanako Kadowaki told a story of when Yasushi Akimoto was one of the judges at the audition of NMB48. However, when she was 13 years old, she didn't know who it was and responded to the questions from the judges without understanding too well. Later, she knew that it was Yasushi Akimoto and regretted her responses, wishing she could answer them again.

People dedicated to working on rehabilitation in Kyoto in the Higashiyama district were then introduced, including Professor Minemura, Ms. Saito from the Rehabilitation Protection Women's Federation, and Mr. Uemura from Japan BBS (Big Brothers and Sisters Movement).

Together they talked about what kind of activities they are doing, including about private volunteers commissioned by the Ministry of Justice, such as a female protector who is a mother and has been protected for rehabilitation in three locations in Kyoto. They visit boys' schools or discrimination centers (helping by sharing the membership fee or funding with fundraising and subsidies) to teach studies or participate in athletic meetings.

Ambassadors Bad Boys, Yuichi Kimura, Natsuko Yokozawa, and Kanako Kadowaki were all impressed and learned as much as the audience.