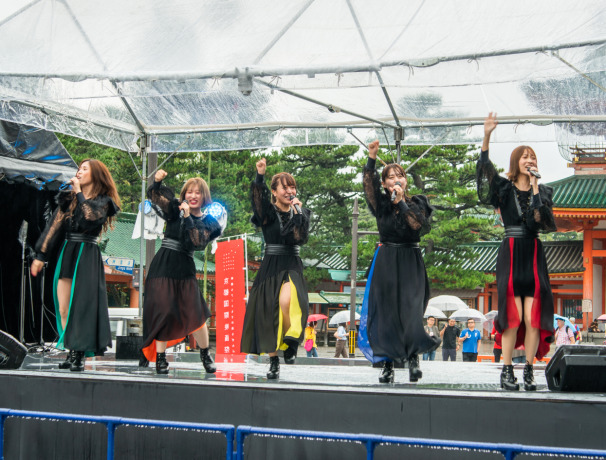 Okazaki Park is perhaps Kyoto’s most popular spot for locals that foreign tourists know little about. In Kyoto’s Northern Higashiyama district, it is home to Kyoto Municipal Museum of Art, the Kyoto Museum of Modern Art, and the sprawling Heian-jingu Shrine.

The area is marked by wide streets, spacious sidewalks and plenty of open space – ideal then for KIFF’s Kyoto Municipal PR Stage, open every day during the festival, with performances by popular Yoshimoto entertainers free of charge, surrounded by booths and restaurants by the festival sponsors.

Ringo praised Kyoto as a city of history, and explained how she spent her college days in the city, so is still attracted to its charm. Each guest relayed their stories of Kyoto with Daisuke revealed his memories of high school days, although after saying that he “played in Sanjo and Shijo,” he couldn’t recall specific episodes so the stage joked “your story is too thin!”.

Miki revealed a video promoting the use of public transportation such as the subway and buses. “I'm so happy to be able to participate in a PR video in Kyoto, where I was born and raised,” said Asei.

Ringo also explained Kyoto's “hometown tax payment” initiative. As a supporting ambassador, Ringo is actively proposing ideas for Kyoto gifts. For example, “A dinner voucher for delicious “Kyoto beef”, a special seat for the three major festivals in Kyoto and more. She called for her hometown tax payments, saying, “please look forward to thinking about various projects that bring together the present and the past” in Kyoto, which is evolving while valuing the good old times. Ringo is scheduled to appear in the second installment of the city-based PR video in which Miki appeared.

Kyoto City's initiatives and new highlights such as the Kyoto City Kyocera Museum of Art, which will be reopened in March 2020, were also introduced to a curious audience.

Although the bad weather brought heavy rain, the event was a great success. “Thank you so much for this rain,” said Daisuke to the crowd which gathered. It was a meaningful event that allowed the audience to feel the charm of Kyoto in a relaxed atmosphere, combined with laughter thanks to the stage participants.