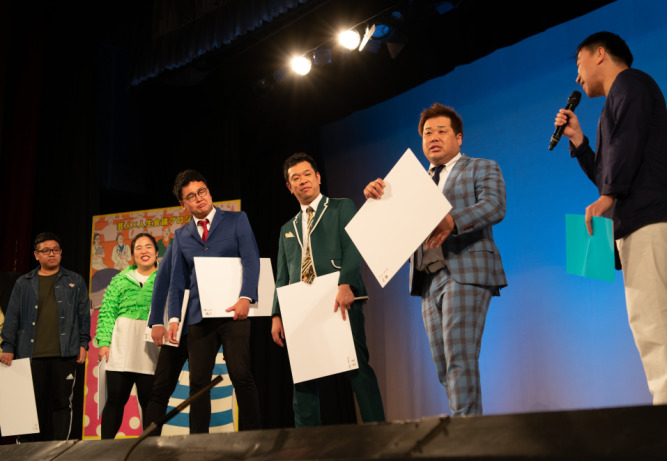 Introducing the night’s comedy and talk shows, he explained the concept of Entertainers x Life Meeting Project: “The Story for Laughing at the End of Life.”

Seven performances combined with two talks on the subject all joked and discussed the theme of “Let's laugh until the end of life”, with a view to enlighten life’s meaning, and speaks to the deep consideration Yoshimoto, the event organizers, have with their audience, along with their long running promotion of Sustainable Development goals.

MIKI (a duo of members named Asei and Kousei) were first to present an 8-minute routine, followed by MITORIZU (Shuntaro Mariyama & Lilii), solo performer Yuriyan Retriever who had the audience in stitches with a routine in which she impersonated the New York accent, and PLUS MINUS (Takashi Kanumitsu & Yoshimasa Iwahashi).

Host Hachimitsu stepped in midway through the stand up shows to encourage the audience to visit the festivals stage set up in Okazaki Park, where a booth is in place to provide more information on the concept of comedy until the end of life.

After the break, duo Akina (Kenta Akiyama & Fumikazu Yamana) struck an initially more somber and serious tone that soon grew in structure and inventiveness, joking about what exists between Tokyo and Osaka... (jazz bars and izakayas, as it turns out!).

Missileman (Akira Iwabe & Hiroshi Nishidai) were up next, looking like 1950s rock and rollers, while final act Ginshari (Kazuhiro Unagi & Nao Hashimoto) produced a classic straight an vs funny man combo full of jokes, all while looking sharp in blue blazers with red ties.

All comedians came to the stage for two talks after the 7 performances, the first on the topic of “What do you want to do at the end of your life,” each producing cards of proposed last requests that included Big Macs, getting married and a simple kiss.