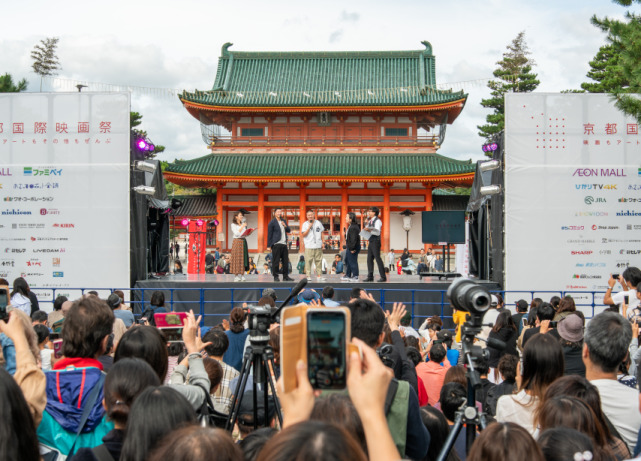 Sunday morning at KIFF started off on a high note as the powerful family drama Finding Light at the Darkness Festival screened at Toho Cinemas Nijo at 10:30am. Director Yukiyasu Asano’s multi-layered work centers on Ogawa (Seiji Rokkaku), a salaryman who has devoted his life to his company. When he is suddenly forced into (very) early retirement he must figure out how to live, and how to deal with his family’s issues.

The family, who live in Fuchu near Tokyo, consists of his divorced daughter Misa (Aimi Satsukawa), who is a single mother to toddler Karen, his wannabe-actor son, his devoted wife (Reiko Takashima) and a losing it elderly mother. At first the transition to Ogawa not working seems to be relatively smooth, but slowly we learn he is not realistic about his future job opportunities, feels defeated and worthless, and cannot find any direction. Misa, while appearing well adjusted, is actually a mess, falling for younger boys and then not giving her sensitive daughter the attention she needs. Ogawa’s feelings of worthlessness slowly start to abate when he turns his attention to a local, historic matsuri (festival).

Asano, who wrote the script and directed, has crafted a work that deals with so many aspects of Japanese life. Unlike many films, the characters are flawed and often pathetic. Even when they learn they still don’t handle things well. Thus one theme is ‘people make mistakes, they’re doing the best they can.’ The numerous scenarios that evidence this show the leads as very human and very relatable, not coming up with pat answers to difficult problems of human existence, which adds to the power of the film. In addition, Asano address the role tradition plays in Japan. He notes the delicate balance between history and innovation, tradition and progress, stressing the importance of both.

After the screening Rokkaku and Asano spoke to the captivated crowd. In a wonderfully impromptu and informative conversation the pair got into a discussion of Rokkaku’s portrayal of Ogawa. He noted, “Well I’ve never been laid off, seen my livelihood disappear or had to start from scratch to look for an occupation. But having said that, my mother pointed out my situation is actually similar. If I weren’t an actor I really don’t know how I’d earn a living. And I have to give my all to every job to keep working.”

The director noted the importance of the location and the real festival. “(Parts of the film were shot on location) in Fuchu, which is a train ride out of Shinjuku. The matsuri, which has a history of over 1,000 years, is an important event. So I had to think carefully how to shoot the matsuri, how to make sure I respected the people and how to portray the festival properly.” He added, “We didn’t use computer graphics or anything like that. We shot during the actual festival and our actors carried the portable shrine.”

In the afternoon under bright blue skies and with the sun shining down, attention turned to the stage at Okazaki Park, surrounded by picnickers and families enjoying the warm weather.

A series of events drew large crowds, starting at 1pm with a stage show supported by the Consumer Affairs Agency. Comedians Yuriyan Retriever and Chocolate Planet (Syorei Osada and Shun Matsuo) took to the stage with a backdrop of Heian Shrine, to promote the idea that everyone is connected.

Led by one of Yoshimoto’s most famous comedians, Yuichi Kimura, the “RE:Start - Power to Make a Brighter Society” followed, a talk event supported by the Ministry of Justice. Bad Boys (Masaki Sata and Kiyoto Omiza), Natsuko Yokosawa, Shimofuri Myojo (Seiya and Soshina) and Kanako Kadowaki of pop group NMB48 all joined the event to promote a brighter future.

The 6th Kyoto International Film and Art Festival came to a conclusion with a gala party at the Hotel Okura Kyoto, traditionally considered the leading luxury hotel in the city. Guests from all areas of the Japanese film industry as well as artists congregated in the 4th floor banquet hall to celebrate the successful conclusion of another KIFF.

Kyoto International Film and Art Festival Executive Committee Chairman Ichiya Nakamura kicked off the festivities with some opening remarks. He observed, “We were able to see a lot of great film and art at the fest which utilized every part of Kyoto city. I think this event is unique in the world for what it puts forth and I would like to thank all the filmmakers, artists, producers, executives, government officials, media and everyone who contributed to the event.”

Sadao Nakajima, Honorary Chairman of the Kyoto International Film and Art Festival Executive Committee offered a toast for the great effort put in by all. As guests enjoyed the refreshments the Mayor of Kyoto, Daisaku Kadokawa, took the stage. He first offered his thanks to all the tens of venues that had offered their space to host events, performances, screenings and exhibitions for the festival.

He noted that he is happy to help promote the UN’s Sustainable Development Goals (SDGs). The Goals are principles that encourage a sustainable lifestyle for humankind, spearheading a socially conscious aspect to the fest. Kadokawa stressed KIFF was contributing greatly to the cultural life of the city, and expressed his gratitude.

Participants enjoyed a show with performers wearing paper mache costumes designed by Takaaki Tsujino and dancing to bagpipe music and the joyous celebration of the arts drew to a close for another year.