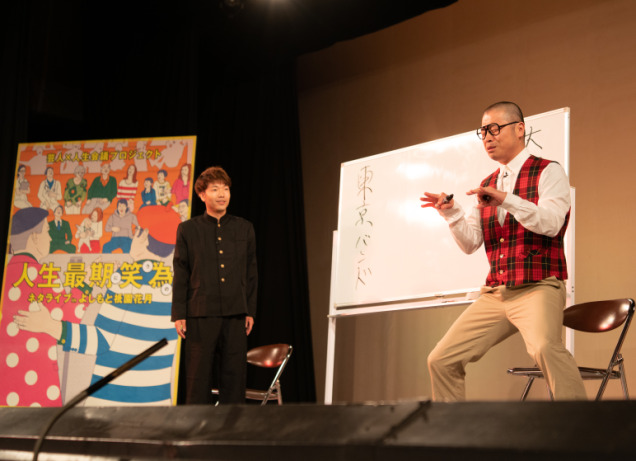 At noon on Saturday October 19 at the AEON Mall Kyoto Katsuragawa, 20 minutes outside of central Kyoto, KIFF involved the public directly in their 2019 festa with a quiz dedicated to raising awareness of the United Nation’s Sustainable Development Goals (SDGs).

60 seats for those gathered at the mall were far from enough with hundreds standing behind on the mall’s first floor, while hundreds more looked on down from above from the open mezzanine on the second floor.

The host Kikuchi Usotsukanai, surprised and pleased by the huge turnout, began by asking if the audience had heard of SDGs by encouraging them to raise their hands. Only a few did, giving him the opportunity to introduce the concept.

7 Yoshimoto comedians who had just arrived in Kyoto in the morning took to the stage to entertain and educate the crowd simultaneously. Among them were Panther, a comedy trio consisting of Ryōtaro Kan, Satoshi Mukai and Takahiro Ogata that have featured in a number of Japanese television shows.

Two other comedy duos joined them, Miki (Asei and Kousei), and Reiwa Kita-Minami, consisting of Ryosuke Kono and Shohei Nomura.

The event first explained the basics of the SDGs by introducing the 17 goals of the programme, aided by a large TV screen flashing each goal.

With lots of families and young children in the assembled crowd, the comedians picked out kids to ask them their names and draw them in to the quiz, much to the amusement and support of the crowd. The event concluded after 40 minutes with the crowd showing huge admiration to the stage!

On Saturday afternoon from 1:50pm KIFF presented a selection of classic film masterpieces at the historic theater Ooe Nougakudou in Kyoto. One program focused on the Hollywood icons Laurel and Hardy, whose lives were recently featured in a hit biopic starring John C. Reilly and Steve Coogan. Film scholar Toshiya Arano was on hand as narrator to present two films which show the chemistry between the fat man and the skinny man. “Liberty” is silent short showing the duo as criminals who escape jail only to find themselves in much bigger trouble in the outside world. “The Music Box” is a later film with sound based on the simple premise of the two comedians delivering a piano to a house with a steep staircase and shows how they use sound effects and dialogue to accentuate their comedy.
A later program featured Harold Lloyd, who like Charlie Chaplin and Buster Keaton, worked as a solo artist and was known for taking incredible physical risks in order to get laughs. Arano introduced the 1926 film “For Heaven’s Sake,” which includes a thrilling chase scene featuring a streetcar. After the film, Arano explained how Lloyd’s use of vehicles was a major influence on modern director George Miller, who paid tribute to this film with his global hit “Mad Max: Fury Road.”

In keeping with Kyoto International Film and Art Festival’s eclectic theme a “Strong Beauty and Art” event was held at the former Junpu Elementary School from 3pm on Saturday afternoon. The event brought together Japanese pro wrestling and art in a community setting in the quaint repurposed school building.

The classrooms of the building saw art exhibitions from local artists while artisans sold clothing and crafts. In addition, local chefs offered food ranging from curry and noodles to cakes and homemade granola. A festive atmosphere pervaded the school as paper mache masks and other creations were worn and exhibited as throngs milled through the school.

The main event was the in the gymnasium however, where a full-size ring was set up and pro wrestlers from Japan’s active Dai Nippon league did battle. The first tag team match was between Yuki Ishikawa’s team and Kota Sekifuda’s team. These up-and coming warriors did battle in fine style with impressive jumps and high-flying knockdowns. In the end, the favorite, blondy Kota, was able to pin his opponent for the victory.

The big event saw the legendary wrestler The Bodyguard with his partner Sekimoto take on a team led by Nomura. These wrestlers were absolute behemoths, with muscles bulging from their impressive frames. The Bodyguard is 170 centimeters tall but weighs 110 kilos, with nary an ounce of fat. The battle saw more blows and kicks than the previous fights with all four combatants punishing each other. In the end The Bodyguard was able to hold down Nomura for the three-count and the victory.

The gala atmosphere at the school was enlivened by both the art and the sport, leading to an electric ambiance. The multitude that filled the school enjoyed every minute of it.

Introducing the night’s comedy and talk shows, he explained the concept of Entertainers x Life Meeting Project: “The Story for Laughing at the End of Life.”

Seven performances combined with two talks on the subject all joked and discussed the theme of “Let's laugh until the end of life”, with a view to enlighten life’s meaning, and speaks to the deep consideration Yoshimoto, the event organizers, have with their audience, along with their long running promotion of Sustainable Development goals.

Miki (a duo of members named Asei and Kousei) were first to present an 8-minute routine, followed by Mitorizu (Shintaro Moriyama & Lilii), solo performer Yuriyan Retriever who had the audience in stitches with a routine in which she impersonated the New York accent, and Plus Minus (Takashi Kanemitsu & Yoshimasa Iwahashi).

Host Hachimitsu stepped in midway through the stand up shows to encourage the audience to visit the festivals stage set up in Okazaki Park, where a booth is in place to provide more information on the concept of comedy until the end of life.

After the break, duo Akina (Kenta Akiyama & Fumikazu Yamana) struck an initially more somber and serious tone that soon grew in structure and inventiveness, joking about what exists between Tokyo and Osaka... (jazz bars and izakayas, as it turns out!).

Missileman (Akira Iwabe & Hiroshi Nishidai) were up next, looking like 1950s rock and rollers, while final act Ginshari (Kazuhiro Unagi & Nao Hashimoto) produced a classic straight an vs. funny man combo full of jokes, all while looking sharp in blue blazers with red ties.

All comedians came to the stage for two talks after the 7 performances, the first on the topic of “What do you want to do at the end of your life,” each producing cards of proposed last requests that included Big Macs, getting married and a simple kiss.